THE DIFFERENCE BETWEEN AIR BARRIERS AND VAPOUR BARRIERS 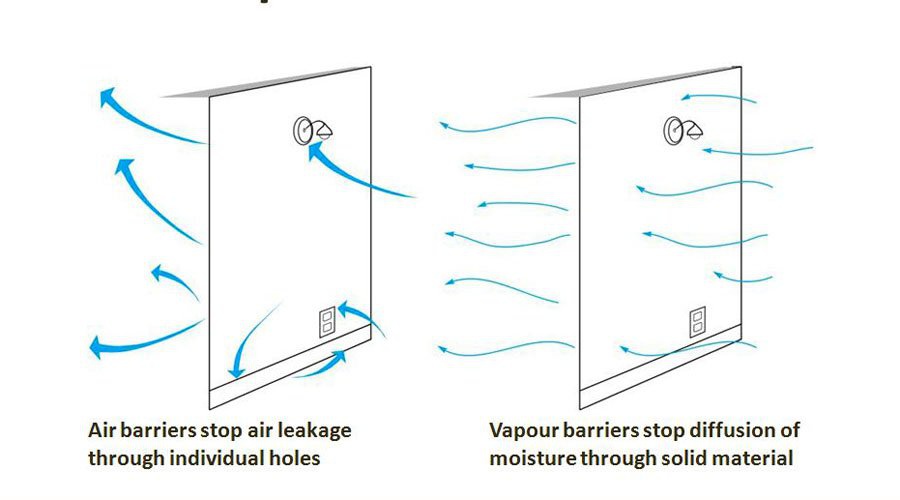 The difference between air barriers and vapour barriers © Ecohome

Can a house be too airtight? No it cannot. The difference between air barriers and vapour barriers is often confused. Also confused, is which one is more important.

The difference between air barriers and vapour barriers

So think of a windbreaker as an air barrier, and a raincoat as a vapor barrier. That is about as far as I can stretch the human to house analogy, hope it helps.

Since warm air expands, there is more space between its molecules compared to cold air. Water vapour is found in that space. When warm air cools as it passes through your walls, it contracts and squeezes out the moisture, leaving you with condensation.

In order to prevent condensation from forming, a vapour barrier should be placed on the warm side of your insulation to stop warm, moist air from condensing on a cold surface inside your wall.

In both cases, the vapour barrier is tasked with preventing warm, humid air from shedding its moisture as it meets a cool surface, no matter which direction it is travelling.

The most important thing to realize is that there is no fixed rule regarding vapour barriers. Building practices should always be determined by the climate in which you are building.

There are two main ways moisture will pass through your walls that you should be concerned about — air leakage and vapour diffusion. These are two completely different things, with two completely separate solutions.

Vapour diffusion is the process of moisture passing through breathable building materials, like drywall and insulation. Vapour barriers are there to prevent that from happening.

Air leakage is due to air pressure differences between indoors and out, which forces air through any holes in your air barrier.

Where the problem arises:

The dewpoint in a wall is the point where the drop in temperature causes air to contract, and water vapour turns to liquid. Since the warmer the air is the more moisture it can hold, where the dewpoint will be in your wall is determined by the difference in temperature from indoor to out, and the amount of moisture in the air (RH – Relative Humidity).

The job of both air barriers and vapour barriers is to prevent moisture from forming at that critical point, they just do it in completely different ways.

The rule for vapour barrier installation in cold climates is to have it on the interior with at least 2/3rds of your insulation on the outside of the vapour barrier. Air barriers on the other hand can come in the form of house wrap (WRBs), tightly sealed sheathing, insulation that slows airflow, and well-sealed gypsum board (drywall).

To explain this further, Gypsum board (drywall) is vapour permeable, but stops air flow. This means water vapour can diffuse through it, but air cannot pass through it. So if you were to have a home with no windows and no vapour barrier but simply a sealed gypsum board box all around, you would have an airtight seal with no moisture carried through by air transport.

The need for a proper air seals in homes is grossly underestimated, and too much faith and focus is put on the vapour barrier. According to the U.S. Department of Energy, “air movement accounts for more than 98% of all water vapor movement in building cavities.”

If you think of how a polyethylene vapour barrier is installed, it will be cut, stapled and taped, then have nails and screws put through it to install strapping and drywall, along with breaches due to electrical wires and boxes. In most cases, the vapour barrier will be perforated thousands of times during the building process.

But a perforated vapour barrier would actually not be a problem if you have a tight air seal. Like that gypsum board box, the amount of water vapour that can pass through a ripped and torn vapour barrier is insignificant as long as the air seal is intact.

Can a house be too airtight? No it cannot.

Unfortunately, air barriers are really not given the attention they should be in regards to the building envelope. In large residential developments, air barriers are often not even on the radar. Crews come and go, and in the interest of mass production, some standard practices can be detrimental to the performance of the final wall system.

A proper air barrier is one of the most important elements of a successful building enclosure, and one of the most overlooked. Given the amount of heat loss due to air transmission and the potential moisture damage from air leaks, air barriers should be getting a lot more attention than they are.

June 11, 2020 Rob Morelli When you own your own home, there are a lot of small repairs and similar... read more

January 13, 2020 David Weinstein Insulation is an essential part of your home. Not only does it help keep the home... read more

May 11, 2020 David Weinstein There are a lot of people tackling DIY projects at the moment. Some of these are... read more

Wacky Home Inspection Finds #2 Every week we stumble upon some interesting discoveries.  In this picture, the homeowner didn’t clean... read more

Carbon Monoxide Safety: How to Protect Your Home, Identify Issues, and Respond to Emergencies

Carbon monoxide is a tasteless, odorless, invisible gas that occurs naturally through combustion, or, the process of burning. Low... read more

What You Need to Know About Cleaning for Coronavirus

March 12, 2020 David Weinstein There has been a significant amount of concern raised recently about COVID-19, a relatively recently... read more

Wacky Home Inspection Finds #3. 2-1 Toilet-Shower Combo Every week we stumble upon some interesting discoveries.  In this picture, the homeowner... read more

New to Working From Home? Our Top Tips

March 30, 2020 David Weinstein Working from home can be a challenge, especially when you’re not used to it. There... read more