Because civilization is built on neighbors being civilized to each other. 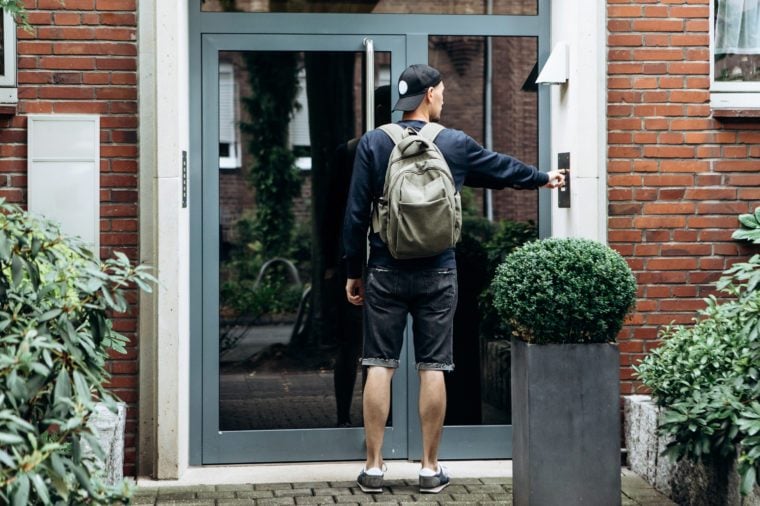 If you have a problem, talk to your neighbors first

Does your neighbor’s music keep you up at night? Are their kids bothering your dog? Talk to them. Having an in-person confrontation can feel scary, particularly if you need to say something you’re worried your neighbor won’t like, but talking things through face-to-face should be the first thing you try, says Diane Gottsman, national etiquette expert, author of Modern Etiquette for a Better Life, and founder of The Protocol School of Texas. “Go with a polite, non-confrontational attitude and you might be surprised how well most people respond,” she says. “Also, a plate of cookies never hurts.” If talking face-to-face doesn’t work try these 12 steps for dealing with bad neighbors. As a last resort, escalate issues to your HOA or local authorities. 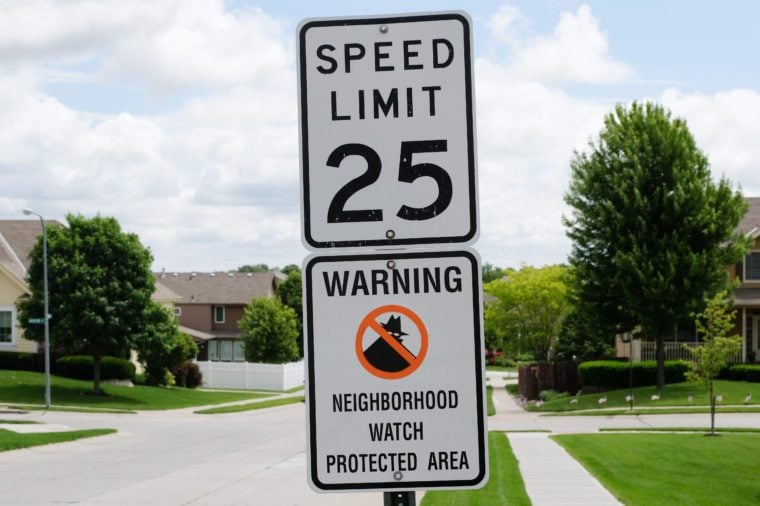 Have a neighborhood safety plan

“Wildfires, earthquakes, floods, hurricanes—you never know what will happen these days and if you ever get stuck in an emergency situation your neighbors are going to be the people you turn to first,” says Julie Bowman, MPH, emergency preparedness and public health expert. This is why it’s so important to set up a safety plan with your neighbors, she says. It can be as simple as printing out a map and marking where people are who will need help―like the elderly—to as complex as a neighborhood watch program or more. What you need will vary by community but start with these tips for making your own neighborhood plan from the National Crime Prevention Council.

This is what to do if your neighbor’s tree has grown into your yard. 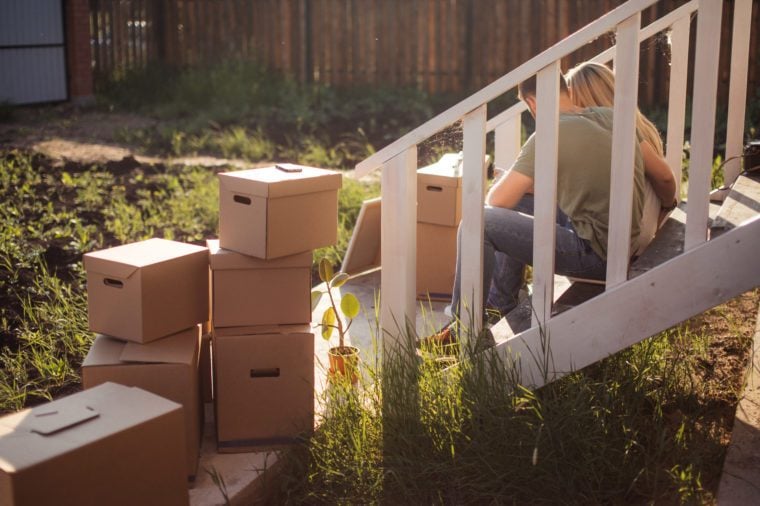 Does your elderly neighbor have an unkempt yard? Does the single mom next door always leave her garbage cans out? Are the kids unruly at the bus stop? Instead of gossiping or complaining, reach out and see if you can find a way to help—for instance, mowing your neighbor’s lawn, bringing her trash cans in when you bring in yours, or offering to stand outside with the kids until the bus comes. “Often there are very simple things you can do to solve the problem and not only will you brighten someone’s day but there may come a time when you need help and you’ll want your neighbors to be there for you,” Gottsman says. 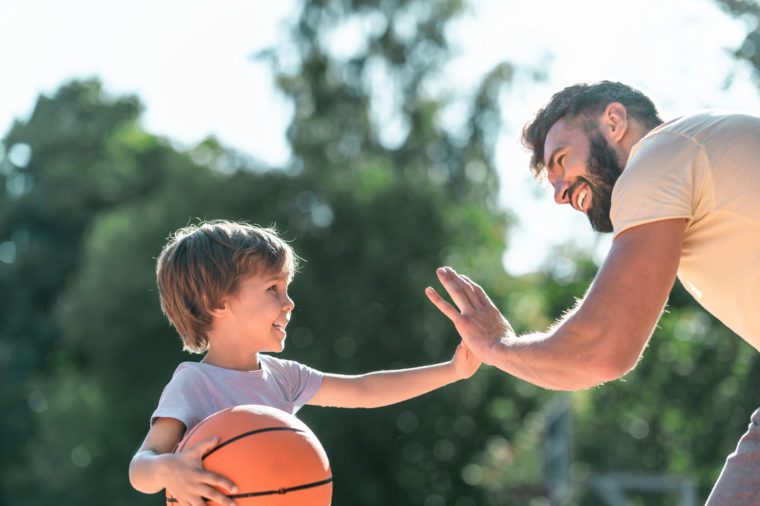 Thanks to the Internet we’re interacting with people around the world more than ever but that may mean we’re also interacting much less with the people right next door to us. Fortunately, it doesn’t take much to change that, says Bonnie Tsai, founder and director of Beyond Etiquette. “A smile, a wave, a brief exchange of pleasantries, can inspire a lot of goodwill with your neighbors,” she says. It doesn’t take much and makes the neighborhood a much happier place overall. 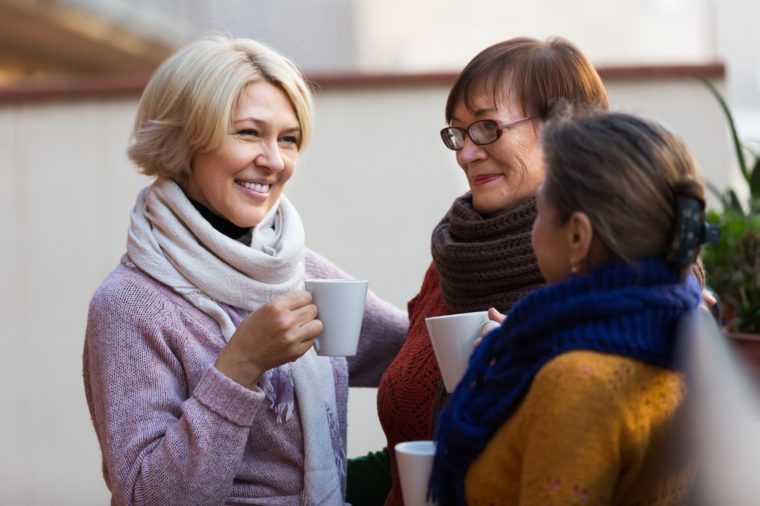 This is Good Neighboring 101 but you’d be surprised how many people have lived next to someone for years and don’t know the first thing about them. Good neighbors will make the little extra effort to learn their neighbors’ names and a few things about their lives, like how long they’ve lived in the area, where they work, or if they have kids or pets, Tsai says. The payoff can be great. It will make you feel more connected to those around you but it can also help make your neighborhood safer—neighbors who know each other are more likely to watch out for each other. One of the best defenses against a home break-in is a neighbor who knows your schedule and notices something out of the ordinary. Check out 15 more ways you can be a good neighbor. 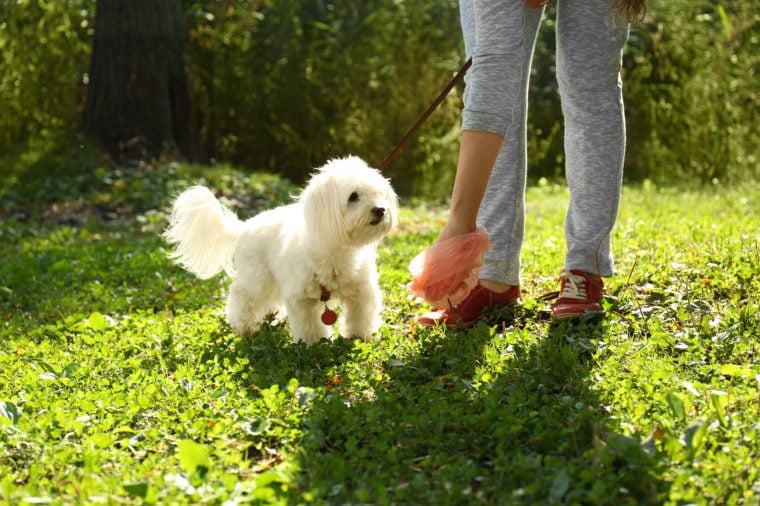 Pick up your dog’s poop

“It’s just plain rude to leave dog excrement in public neighborhood areas or in other people’s yards,” says Erin Askeland, certified pet behavior expert at Camp Bow Wow. “Not only is it rude, but it’s also gross; dog excrement can transmit diseases, damage plants and grass, and, let’s be honest, doesn’t have the most pleasant smell.” Good neighbors understand that it is their responsibility as pet owners to clean up after their animals, she says. 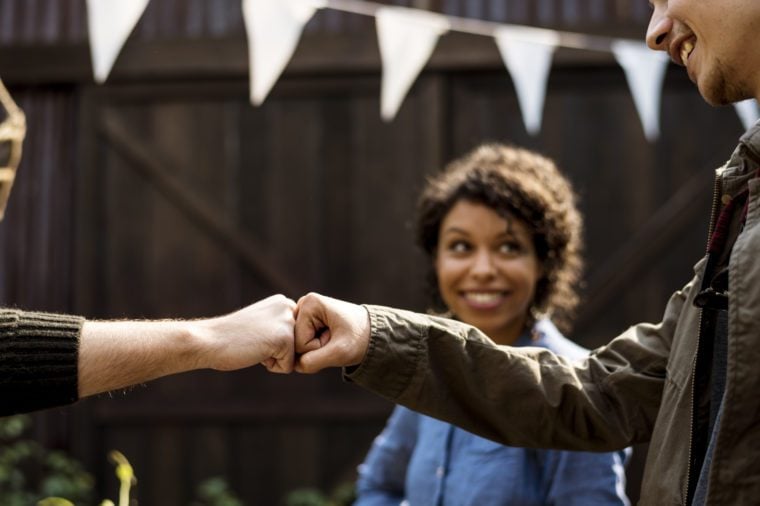 Give your neighbors the benefit of the doubt

Do the teens next door have crazy hair and tattoos? Does the neighbor across the way practice a “weird” religion? Does the guy next door drive a big white van? Instead of assuming your neighbors are hoodlums, terrorists, or serial killers, give them the benefit of the doubt, Gottsman says. This doesn’t mean ignoring when people do bad things or putting yourself in unsafe situations, it simply means seeing people as people first and looking for other possible explanations for their behavior besides negative ones. You don’t have to be their best friend but you should treat them with respect and kindness, no matter what, Tsai says. 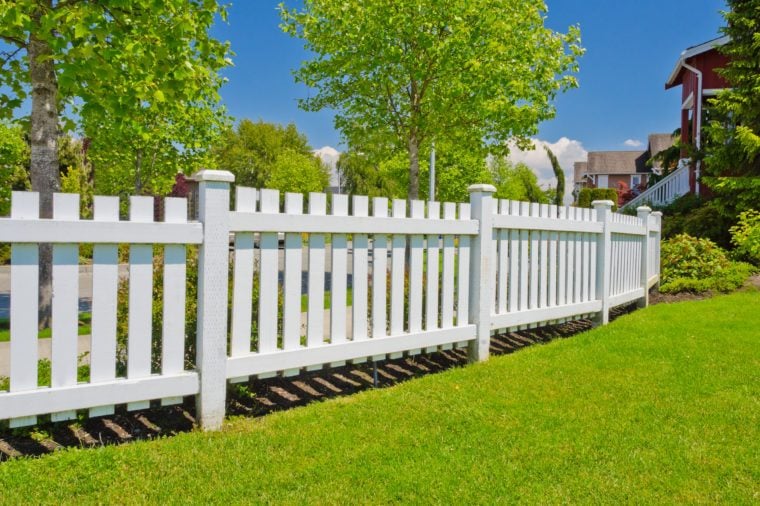 “Good fences make good neighbors” isn’t just a cute Instagram quote, it’s really good advice as having appropriate boundaries—both physical and personal—can head off many of the typical neighbor fights, Tsai says. “It’s totally fine to say no sometimes. In fact, saying yes to everything your neighbors ask of will likely end up negatively impacting your relationship due to resentment and exhaustion,” she explains. Start with these 10 ways to build trust with your neighbors. 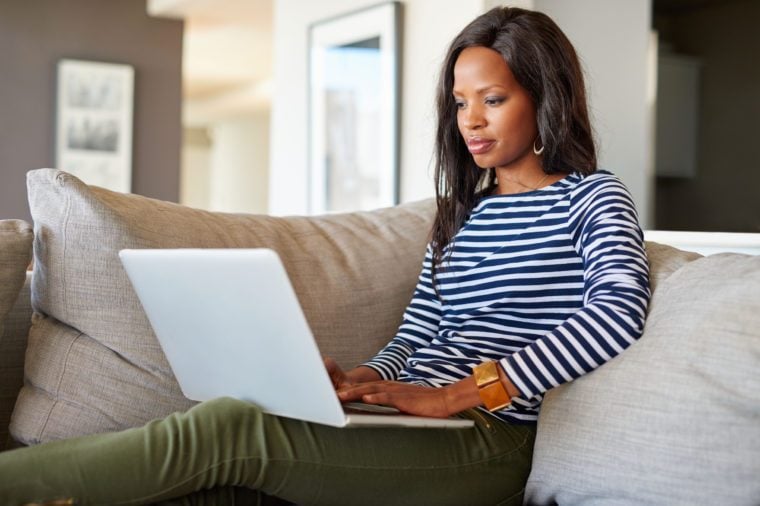 Don’t fight with your neighbors on social media

Keyboard warriors are everywhere these days, using neighborhood apps and social media groups to share their indignation over everything from politics to teenagers trick-or-treating to dog poop. While this might garner you a lot of support, it doesn’t do much, if anything, to solve the problem and just marks you as a complainer, Gottsman says. “Hiding behind a keyboard is a very passive-aggressive way to deal with problems you may have with your neighbors,” she says. If you have a problem with a particular neighbor, talk to them offline and certainly don’t call people out by name on social media, she says. If your issue is more widespread—say a dangerous intersection by a bus stop—you’ll get better results calling the school, the bus company, the HOA, or the police directly. Besides, engaging on social media in a negative way could make you one of these real-life nightmare neighbors. 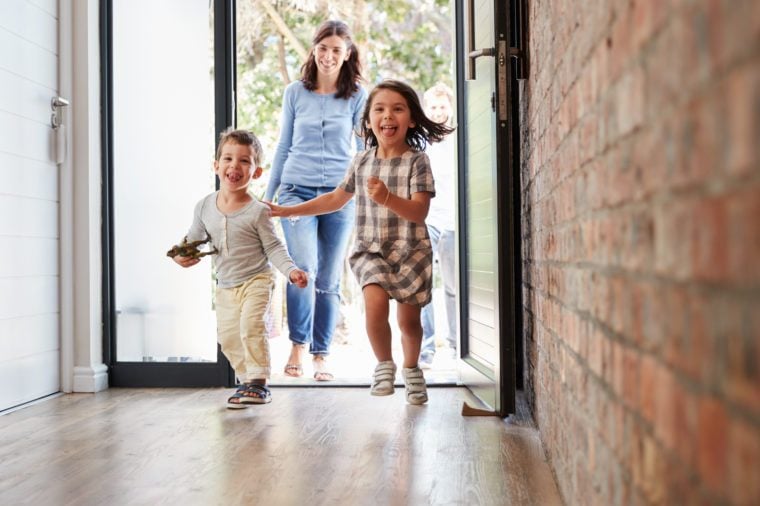 If your neighbor is kind enough to invite you to their picnic, birthday party, game night, graduation party, or another event then you should be kind enough to give them a prompt answer, says Emilie Dulles, a protocol expert and founder of Dulles Designs. Unfortunately, it’s become very common today for people to either not RSVP at all or to hold back on responding, waiting to see who else is coming first, but this makes it very hard on hosts, she says. 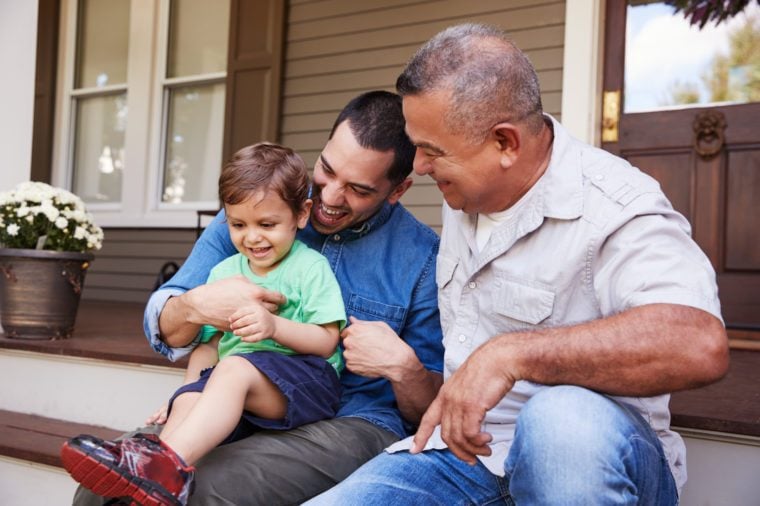 We often reserve our best manners for people we’re trying to impress, like a boss or potential partner, and let them slide when we’re at home. While it’s fine to be more casual with your neighbors than your coworkers, you should always be polite, Tsai says. This means saying “please” and “thank you” or “excuse me” and other niceties. Even if you find them annoying or rude, set a good example. Civilization is built on people being civilized to each other! Do you know these 10 things your neighbors won’t tell you? 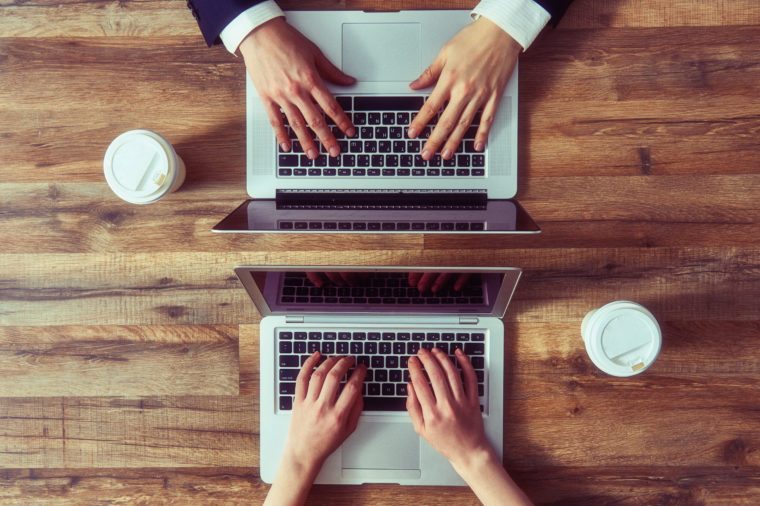 Stay positive about your community online

Neighborhood apps, Facebook groups, and community message boards have replaced the backyard fence of older days, becoming the main way neighbors share information. These can be a great tool, as long as you remember your manners online as well. “The whole point of these groups is to build community and camaraderie so keep your posts and comments positive and productive,” Gottsman says. “Before posting something, ask yourself, ‘What is the benefit of this?’ and ‘How would I feel reading this?’” And if someone is mean to you online? “Take the high road and simply reply, ‘Let’s discuss this in person,’” she says. Can you guess the things your neighbor wants you to STOP doing? 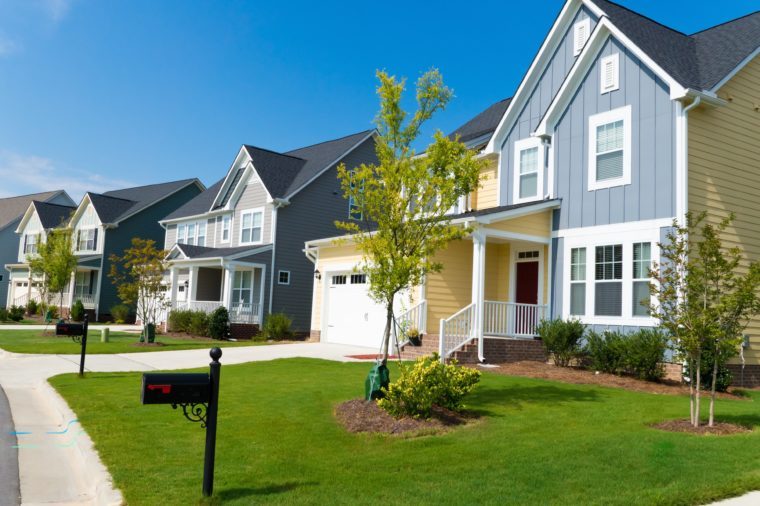 Many fights between neighbors start over a disagreement about the rules and how someone is or isn’t following them. Most of these can be avoided by simply doing your best to abide by the standards set by your neighborhood, Gottsman says. Whether that’s taking down holiday decorations by the end of January or not playing music outdoors after 10 or keeping your garbage cans out of sight, these were things your neighbors have decided are important so you should make a good faith effort to follow them, even if they seem silly to you. If you live in an area with an HOA, these rules were likely spelled out in your signed contract. Otherwise, you might have to dig a little deeper to figure out what the expected norms are in your neighborhood.

March 20, 2020 David Weinstein Without mincing words, times are scary. People are afraid, and beyond that there is a... read more

Stranded Without a Kitchen Island?

February 27, 2020 David Weinstein When it comes to home improvements, there are few things that are requested more often than... read more

Is Now a Good Time to Buy?

May 4, 2020 David Weinstein With social distancing being an important part of life at the moment and so many parts... read more

Starkist Tuna Can for Junction Box

Wacky Home Inspection Finds #1 Every week we stumble upon some interesting discoveries.  In this picture the home owner used... read more

April 27, 2020 David Weinstein Buying or selling a home can be stressful even under ordinary circumstances. Unfortunately, the current state... read more

Wacky Home Inspection Finds #3 2-1 Toilet-Shower Combo Every week we stumble upon some interesting discoveries.  In this picture, the homeowner... read more

Starkist Tuna Can for Junction Box

Wacky Home Inspection Finds #1 Every week we stumble upon some interesting discoveries.  In this picture, the homeowner used a... read more

Is Wallpaper Making a Comeback?

March 16, 2020 Rob Morelli Wallpaper has been around for thousands of years in one form or another, with wallpaper-like... read more